Seamen’s Bank Long Point Charitable Foundation is proud to announce a $15,000 donation to the Provincetown Art Association and Museum’s exhibition The Arrival 1620. The Bank’s Foundation is honored to support the showcase of visual history of the Pilgrims’ First Landing as Provincetown prepares for the 400th Anniversary of the Mayflower’s arrival in Provincetown Harbor.

“As an institution founded on community, we are grateful to the Provincetown Art Association and Museum for taking the lead in curating such an amazing exhibition honoring the voyage of the Mayflower” said Lori Meads, President and CEO of Seamen’s Bank, ” We are excited and thankful to share in this historical time for Provincetown and the World commemorating the 400th Anniversary of the signing of the Mayflower Compact in Provincetown Harbor and telling the story of the native tribes as they viewed this new experience.”

This exhibit will encapsulate the moment of arrival of the Pilgrims, both from their perspective and the perspective of the native tribes. The exhibit will feature life-size figures, a to-scale Mayflower, and proportional sea and sky, turning one PAAM gallery into the shores of Provincetown that existed 400 years ago. It will also highlight the concept of water- both the idea of water as a mover, and a necessary source of nourishment, exploring the absence of water as among the reasons the Pilgrims left Provincetown.

Chris McCarthy, Chief Executive Officer of PAAM said “Provincetown Art Association and Museum is extremely grateful for the consistent support we receive from Seamen’s Bank Long Point Charitable Foundation. The Arrival 1620, a site-specific installation by artist Mimi Gross, is a complex and unique exploration of the First Landing in Provincetown, and we would never be able to mount this important exhibition without the trust and steadfast leadership that the Bank employs.”

The Arrival 1620 will be on view from October 2, 2020 to November 29, 2020. The exhibit will be created by Mimi Gross, artist and daughter of acclaimed Provincetown sculptor Chaim Gross. 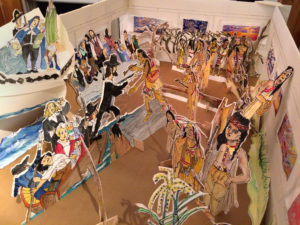