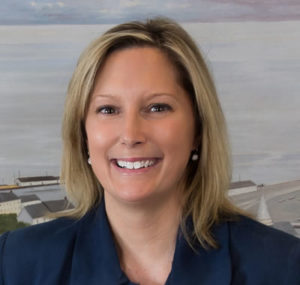 Roderick’s career at Seamen’s Bank started in 1991 as a Vice President. He has served as President for twenty-five years.

Meads started her career at Seamen’s Bank in 1992 as a teller and has had various promotions over the years. Along with the role of President, Meads will continue her current role as CEO of Seamen’s Bank and Executive Director of Seamen’s Long Point Charitable Foundation. Meads is involved in several non-profit organizations on the Lower and Outer Cape including; Member, Town of Truro Finance Committee; Treasurer, Provincetown 400 Executive Committee; Board Member, Helping Our Women (HOW); Board Member, Sustainable Cape; Board Member, Accessible Provincetown; Past President, Advisory Committee, Community Development Partnership and Administrator, Pilgrims’ First Landing Park.

Meads has been recognized for her commitment to her community, in 2016 she was named Community Bank Hero by Banker & Tradesman and has just recently been awarded the Portuguese Heritage Award by Marcelo Nuno Duarte Rebelo de Sousa, President of the Portuguese Republic, for her many contributions to the Portuguese community.

Meads holds a Bachelor’s Degree of Science in Business Administration from Bryant College (now Bryant University) and a MBA from The New England College of Business. She is a Truro native and still resides there with her husband, Michael and daughter, Emily.